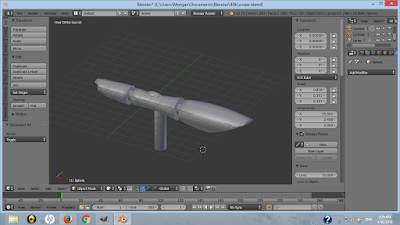 Thanks to Blender and Shapeways, 3d printing your own custom components for 28mm scale models is totally achievable.

The idea of the snap shot made its debut in 6ed. The advent of flyers seemed to require a mechanic to make them harder to hit, and the simple idea of needing 6s stepped up to the plate. As is often the case, once the mechanic had emerged, it seemed to find a home in a range of other places too, helping fast moving and pinned troops remain involved in the game.

Overwatch was a big part of 2ed, but was removed in the transition to 3ed. Overwatch then was a very different beast to the rule we have now; it cost a unit it's turn, but allowed them to fire during the following enemy movement phase. This allowed a unit to cover an approach from an as yet unseen enemy. As charging also happened in the movement phase in 2ed, it could also be used by a unit that expected to be assaulted next turn, which could occasionally prove useful if the enemy were presently out of range of some of your good guns.  Unfortunately, taken to extremes it resulted in games stagnating, with both sides hidden and on overwatch to punish whomever came out of hiding first. This is no doubt one of the reasons it was removed. It's return in 6ed leveraged the new snap shot mechanic, with a kludge for templates, and a more limited focus.

So what's the problem?

My attention was drawn today to the final power of the Phantasmancy discipline, the Mirror of Minds. Many have commented that this is what Mind War should have been; but what I like is the potential to stack Ld debuffs to make an extremely damaging spell. 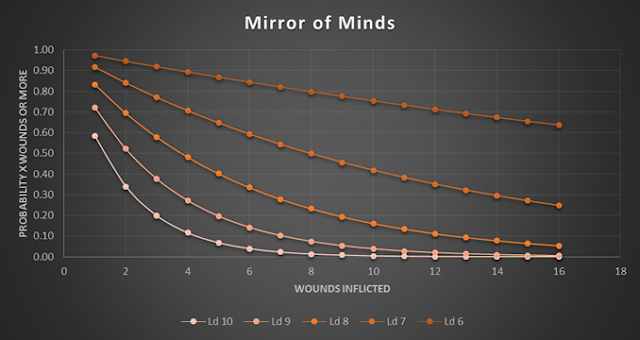 Admittedly, it's hard to make it go in the first place.

Steps to execute Mirror of Minds nuke:
1. Roll a 6 on the Phantasmancy table (up to two tries per Shadowseer in the army)
2. Move within 24" of the target enemy
3. Move Ld debuffs within range (6" - 12") of the target enemy
4. Successfully cast WC 2 power
(4a. If the target is in a unit, get 3 or more successes)
5. Opponent fails to deny your witch
6. Roll to hit
7. Cackle maniacally

But if you can manage the above your payoff can be pretty huge.

It's worth noting that at against base Ld 10, as most of your worthwhile targets will be, there is not a lot to write home about. You'll average a wound. But, the magic happens when you lower your targets Ld to a more vulnerable value.

Start with the Mask of Secrets in the Harlequin book, and reduce your target enemy's Ld by two. This is enough to boost your damage from probably one wound to a 50% chance of four or more.

With no armour or cover saves allowed, this is going to sting.

Next, bring the Armour of Misery on a friendly Dark Eldar model. If you don't mind starting in reserve, you can use the webway portal to enter very precisely. In fact, if your Shadowseer with the Mask of Secrets is the one who rolls Mirror of Minds, he can join the unit for a potentially rather nasty psi-strike.

With a further -2 Ld, the target is testing on Ld 6. Now your enemy needs to roll a 6, at the same time as you roll a 1, to escape from the power's grip. There's a 50% chance of the target taking 24 wounds or more before making that roll. No armour, no cover.

Better get yourself an invulnerable save, son. Better get a real good one.

Finally, if the enemy is unfortunate enough to start with Ld lower than 10, or if you are canny enough to get a further -1 modifier, your target is in the unfortunate situation of not being able to escape. You may continue testing until he is slain, allowing you to inflict an arbitrary amount of damage.

I now hope to see this combo vs 1+ FNP man. Your move, tourney scene.

Posted by Creeping Darkness at 4:57 PM No comments:

Synergy is a condition where the utility of an entity is greater than the sum of the utility of its parts. For example, if sufficient synergy existed between 1 and 2, then 1 + 2 might equal 4. The opposite condition, which I dub dissynergy, is when 1 + 2 = 2. Dissynergy is, in my view, the root problem of the 7th edition Dark Eldar codex.

Read more »
Posted by Creeping Darkness at 3:45 PM No comments:

I know, right? I go and make a whole series unpacking the maths of the psychic phase, and then the Eldar get to be all special unique snowflake about it. What to do?

Work it out, obviously.

Read more »
Posted by Creeping Darkness at 1:30 PM No comments:


It would appear that there is a slight decrease in survivability for Land Raiders exposed to S: D weapons, compared to S 10 weapons.

Read more »
Posted by Creeping Darkness at 9:31 PM No comments: